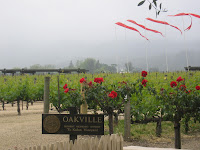 To feed my obsession with the Mondavi family, we headed across the street (from Opus One) to the Robert Mondavi Winery. I promised the group it was the last Mondavi stop for the day, although I quietly informed The Husband it wasn’t “our” last stop during the trip to the Napa Valley. There is still Robert Mondavi’s two son’s wineries as well as his brother, Peter Mondavi who owns Charles Krug.

There are several different types of wine tours you can take at the Robert Mondavi Winery and there is no appointment necessary for a general wine tasting. Meaning, you can get in and out of there with a quick tasting if you just want to check things out. The gardens around the winery are amazing so if you’re limited on time do a quick tasting then do your own little tour around the grounds.

If you’re new to wine, I highly suggest checking out the Mondavi wine education classes. Even if you’re not new to wine, these are good classes since they offer a 45-minute basic course/tasting, a two-hour beyond basics program and a two-hour way beyond basics course to choose from. All are by appointment only and they are limited in size so book early. (Don’t call the week of thinking you’ll be able to book something that weekend. You need to shoot for a few weeks out and you’ll have better luck booking things on a weekday when the winery isn’t as busy.)

Having already done a general tour/tasting on my last visit to the Robert Mondavi Winery I had arranged for our group of four to do the Exclusive Cellar Tasting (this tour is limited to 10 people). I simply couldn’t resist the opportunity to taste a variety of limited production, reserve and older vintage wines in a private, setting where I could ask so much more about the wine and the winery.

As the marketing machine Mondavi is known for, we were escorted to a small garden area outside the gift shop to wait for our guide. Brilliant. I was soon outfitted with a new fleece and everyone in the group had made a purchase as well.

We were soon greeted by our Wine Educator, Janie, who started us off with a brief tour of the inner workings of the winery. We visited the massive fermentation room filled with huge French wood tanks lined up on both sides of the room. (Mondavi had been more than influential in Napa, he pushed the use of French oak in the Napa Valley, changing the wine it produced.) A production video was shown at this point. It was pretty short and sweet but it prepared us for the next step in the tour. We walked down into the massive barrel aging room; totally a sight worth seeing. It’s truly a work of art with the barrels, the statues and the overall ambiance. In all honesty, the Robert Mondavi Winery is somewhat of an art gallery. Everywhere you turn there are massive statues and brilliant paintings. In addition to its permanent art collection throughout the winery, they also rotate artwork from different local and emerging artists every two months.

Back to the tour… Off to the side of the barrel aging room there is a private tasting room where we spent the next two hours. (The tour is only supposed to last an hour. I think the four of us chatted Janie’s ear off.)

Janie had laid out a fabulous spread of artisanal cheese and charcuterie to pair with the wines when we began the tasting. During this time we experienced so many different wines. I think I was in love with each and every one of them and I’m not typically a big fan of whites or pinot noir. My pallet was forever changed as I found new respect for Sauvignon Blanc. To name a few of the reserve wines we had:

I’ll spare you my rendition of the Robert Mondavi Winery history as this short clip provides a good overview.

One thing I wish we had planned around for this trip was the events the Robert Mondavi Winery has, specifically its summer concerts. If you’re planning a trip to the Napa Valley definitely check out their event schedule as they always have something going on. Things sell out quickly since the space is limited.