This post was created in collaboration with Hotel Planner.

Pittsburgh is regularly considered one of the most livable cities in the world, given its active communities, parks, museums, economy, rich history, and everything else it has to offer. With this, one would assume that Pittsburgh is also one of the cities people should most visit. At least, that’s how I see it. If you’re planning to visit Pittsburgh soon, make sure to check out our list of 10 fun things to do in Pittsburgh with kids. Several of these are good even without kids!

Get Cultural at One of the 30+ Museums

Image via Wikimedia by Ragesoss

To say that Pittsburgh is rich in history is an understatement, and the number of museums within the city confirms it. You could spend a month exploring the more than 30 museums in Pittsburgh. To narrow it down, try ToonSeum, one of three museums in the United States dedicated to cartoon art; the Children’s Museum of Pittsburgh; or the Carnegie Science Center.

If your kids are older, consider visiting one of Pittsburgh’s major art museums, including the Andy Warhol Museum, the Carnegie Museum of Art, the Frick Art and Historical Center, the Pittsburgh Center for the Arts, the Mattress Factory, or the Carnegie Museum of Natural History. The latter is the fourth ranked natural history museum in the U.S. and has extensive dinosaur, mineral, animal, and Egyptian collections.

Did you know that Pittsburgh hosted the first professional football game and the first World Series? That’s a fun fact for sports lovers. Another fun fact is that Pittsburgh is home to the NFL’s Steelers, the NHL’s Penguins, and the MLB’s Pirates. Sports fans of any age would be happy with catching a game when they visit Pittsburgh. 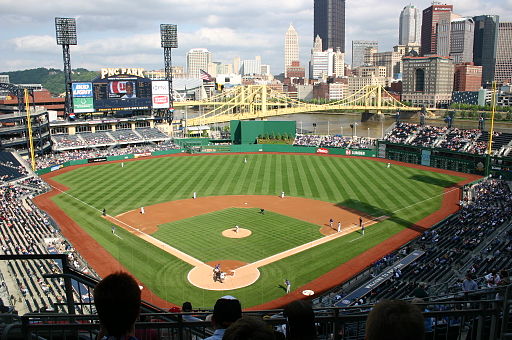 Image via Wikimedia by Minorfreak

Baseball lovers can get a behind-the-scenes walking tour of PNC Park, which is consistently ranked one of the best baseball stadiums in the country. Home to the Pirates, PNC Park offers a 90-minute tour that gives guests a broad view of the 38,000-seat facility with its classic view of the city’s picturesque skyline. Tours are wheelchair and stroller accessible.

Every visit to one of America’s historical cities should include a short, fun, fact-filled city tour. The one-hour tour offered by Just Ducky Tours will entertain and educate both kids and adults. The fully narrated excursion begins in historic Station Square, goes through the the city’s business and cultural districts, and ends at the river where you ride an authentic World War II amphibious vehicle to complete the tour. 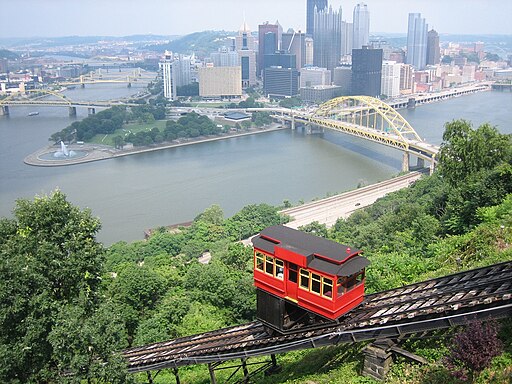 Image via Wikimedia by Plastikspork

Named one of the top 10 sites in the world for viewing a cityscape by “USA Today Weekend Magazine,” the Duquesne Incline is a must for those of all ages. The century-old cable car is one of the few remaining inclines in the country, and it takes you above the city’s three rivers for a panoramic view of downtown Pittsburgh. Between rides, guests can visit the machine room to observe the original hoisting equipment from 1877 and enjoy the upper station house, where there’s museum filled with information on Pittsburgh’s rich history.

A Day of Amusement

If your kids are into amusement parks or you just need to have a few thrills during your visit to Pittsburgh, check out Kennywood Park, Sandcastle Waterpark, or Idlewild. Kennywood Park is a unique mix of classic rides and modern thrills, including six roller coasters, a 14-ride Kiddieland, and several other attractions.

Idlewild was named best kids’ park by Amusement Today, and best park for families by the National Amusement Park Historical Association. With 35 different rides, attractions, and shows, as well as its SoakZone Water Park, it’s easy to see why. Sandcastle Water Park is a great location to cool off during the summer months.

Image via Wikimedia by Chris Connelly

Did you know that Pittsburgh is home to 446 bridges? It’s officially the city with the most bridges in the world, with three more than former world leader, Venice, Italy. It’s no wonder Pittsburgh has been dubbed “The City of Bridges”.

Visiting the bridges is a fun thing to do in Pittsburgh with kids as you’re touring the city. It’s also fun to find out why they’re all painted yellow. A few more popular bridges to be on the lookout for include Roberto Clemente Bridge, Andy Warhol Bridge, The Fort Pitt Bridge, and the Smithfield Street Bridge.

With countless performing arts theaters in Pittsburgh, catching a family-friendly show shouldn’t be hard any time of the year. This could end up being one of the best things to do in Pittsburgh with kids on a rainy or snowy day.

Image via Wikimedia by Anne Oeldorf-Hirsch

Home to more than 500 birds representing more than 150 species from around the world, with some threatened or endangered, the National Aviary gives visitors an opportunity for an up-close interaction with free-flying birds. Kids will love the natural music throughout the aviary and the chance to hand-feed many of the birds. Here’s a little more on what to expect when you visit the National Aviary.

With nearly 70 colleges and universities in Pittsburgh and the surrounding area, touring a campus will not be difficult. I am never opposed to showing children campuses when we travel. It may just save me time on tours when they’re older. A great way to get them excited about doing well in school now is to show them life in higher education and the variety of schools they can choose from.

Planning a trip to Pittsburgh soon? Have other ideas on things to do in Pittsburgh with kids? Let us know in the comments.