My recent Italian travel companion, Lisa from Canada, introduced me to a whole new Italy — one that starts and ends with cooking. Don’t misunderstand, I heart Italian food, but I always thought it was too difficult for little old me to make it with any semblance of decency. Then, I sat down in Sorrento in front of a plate of pasta mixed with mussels – made by Lisa and I under the direction of Valerio and Andrea at the Villa Adriano Guest House – and I was hooked. 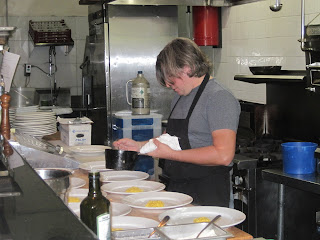 Italian cooking – in Italy – is something else. Upon return from September’s jaunt I promised myself I’d continue my Italian wine and food adventures. It meant getting creative with limited vacation time (stupid Americanos!) and funds; I knew I’d have to play Italy domestically. Luckily I knew exactly where to start!
In January  I happened upon a gem of a restaurant in Denver’s Uptown neighborhood, Il Posto. It has since become one of my favorite eateries. I’ve enjoyed many an evening or afternoon trying the three-course tasting menu, enjoying regional-focused wine pairing dinners as well as happy hours and dinners. Sigh. What can I say? I’m obsessed with Italy!

Chef (and owner) Andrea Frizzi is a native of Milano, so he has created an Italian haven in little Denver. His menu changes nightly to reflect the freshest food he’s able to procure. Seems like even the wine list changes nearly weekly and it’s all italian wines, natch (a place after my own heart)! Think about it: it’s some hard work to not only cook each night, but to place that many varied food orders and create endless menus. I, for one, am committed to patronizing his establishment to show my gratitude!

Chef Frizzi hosts a Denver cooking class the second Saturday of each month featuring a different main dish. (It’s a great Italian cooking class in Denver!) You can also get a private cooking class. As an avid risotto lover I was pleased to have opted-in for that class. He maxes the classes out at 10 people. That morning nine showed up. Bundled in our North Face and Patagonia best, huddle around a table we were served espresso or tea. It was a cold, soggy day in Denver, Colo. I know, because I squish-squashed through 10 miles in advance of the class.

We were explained how the class would work: we would get cooking demos and tastings of six different types of risotto, then we’d pile into the tiny kitchen, four at a time, to make our own risotto. Oh, and there was to be a contest. The reward was not money or fabulous prizes, but bragging rights for the class’s best risotto. Being a hair competitive my excitement started to build. Time to focus.
The first risotto on the menu was traditional Risotto Milanese. It’s a simple, luscious dish of saffron and parmigiano. 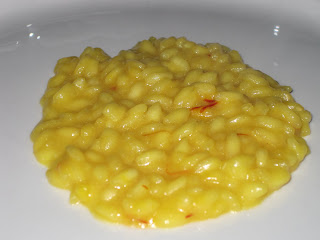 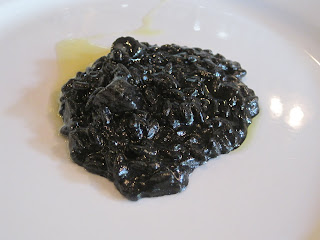 Next we (when I say “we”, I mean Chef Frizzi cooked and we ate) did a simple fruit risotto with pears and walnuts; the only difference was black pepper in lieu of white (since it didn’t include the saffron) and it was topped with pecorino cheese. Another amazing one was the risotto with squid ink and prawns. Because it’s a seafood dish it does not get cheese.

We continued with Chef Frizzi demoing and the class sampling – it was a mutually beneficial relationship, in my humble opinion. We did this six times. I love his teaching style. Going through so many different versions gave us the opportunity to see what could be done with risotto, but most importantly gave us a firm grasp of the fundamentals of cooking risotto before we took to the stove.

Being in the kitchen was stressful. Watch the food, stir, move for people walking by, add more veggie stock when you can start to see the rice again – so much going on! As I was finishing my risotto I tossed in a pinch extra salt and was generous on my olive oil pours. I learned a few things in my cooking classes in the land of dolce vita: put in more salt than you think is necessary and it’s hard to overuse olive oil. It amazes me how terrified western women seem of olive oil. I noticed it both in Italy and during the Il Posto class. Ladies, it’s okay! It’s good for you!

When the time came for some taste testing I tried to pretend I didn’t care. You know, I had to be graceful loser if I didn’t win (I’ve long said I’m a much worse winner than I am loser). But, I was pretty amped when Chef Frizzi pointed to my dish as #1! One of my cooking mates asked what made mine different. “She has enough salt,” he said. Nice! Thank you, Katia from Il Vicario in San Gimignano for the amazing Tuscany cooking lesson that taught me this! 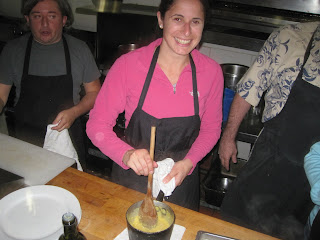 Upcoming Il Posto Cooking Classes
Click here to sign up.
I’ve since made risotto at home, the pear and walnut. I’m pleased to say it was a success!
Risotto Basic
Buon Appetito!

Got good cooking class suggestions for me? Leave a comment or talk to me on Twitter @valeriekq!

This site contains affiliate links. If you make a purchase through them, Carpe Travel will receive a small commission at no cost to you. This commission helps cover the expenses necessary to run the site.

© 2011-2021 Elaine Schoch/Carpe Travel. All rights reserved. May not use text or photos without permission.