As the home of Jazz, Cajun food, and the yearly Mardis Gras celebration, New Orleans has a special place in American culture. Yet aside from these well-known customs, The Big Easy has also become notorious for legends of the paranormal. While walking the French Quarter, visitors can easily pass by some of the most haunted locations in the country. Below are a few of New Orlean’s creepiest places to catch the paranormal. (Make sure to check out Carpe Travel’s post on New Orleans Cemetery Tours.)

Some may have heard of the infamous Madame Marie Delphine MaCarty LaLaurie when Kathy Bates played the infamous serial killer on the FX series American Horror Story. The true tale of this bloodthirsty New Orleans socialite provides the perfect plot for any scary movie.

In fact, many refer to her former residence in the heart of the French Quarter as THE Haunted House of New Orleans. Madame LaLaurie and her husband built the mansion in 1831. Together, the couple hosted lavish parties for New Orleans high society.

On the evening of one party, a fire broke out in the kitchen of the mansion. In putting out the flames, fire fighters were horrified to find an intricate torture chamber hidden behind closed doors.  Slaves stumbled out of the room horribly mutilated, beaten, and on the edge of starvation. Some had had their limbs torn off with one of LaLaurie’s torture devices. Another man had a hole drilled into his head teeming with maggots.

Under new ownership during a later renovation, construction workers discovered dozens of human remains that had been buried alive with their mouths sewn shut underneath the house. Throughout their residency in the home, 35-40 of their slaves disappeared or died from unexplained causes.

Later owners of the house claim to experience a tremendous amount of paranormal activity. Ghosts of LaLaurie and her victims haunt the hallways causing strange noises and flickering lights. It seems Madame LaLaurie continues to take joy in the pain of others even in her death. Many of the later residents would find their health, sanity, and wealth ruined after moving into the mansion. The most famous owner, Nicholas Cage, purchased the mansion just after Hurricane Katrina. He lost the home a few short years later to bankruptcy.

Early one morning, a passing neighbor noticed the home’s front gate ajar. He became horrified to find a pool of steaming blood seeping from underneath the front door. When the police arrived they discovered a horrific scene:

The night before, without a sound heard by any of the neighbors, the entire household had had their throats slit and blood drained, forming large pools of blood covering the floors of the home. In the back courtyard, police found a hand protruding from the ground. The young sultan who had been buried alive, had desperately tried to claw his way out of the ground.

The spirit of the sultan remains in the house, where witnesses have seen his apparition pacing the upper balconies or sitting pensively by the windows. People walking by the house still hear the sounds of music and laughter from inside or smell incense wafting into the street. Others report hearing screams echoing from inside the building. Residents will find mysterious blood stains appear on the floorboards which do not respond to their attempts to clean them. Yet the stains suddenly disappear before professional cleaners arrive

In the French Quarter, you may find yourself walking by a shop front labeled The New Orleans Pharmacy Museum. The unique museum showcases an extensive variety of antique pharmacy equipment and supplies. The shop also plays host to the spirit of a deranged man. 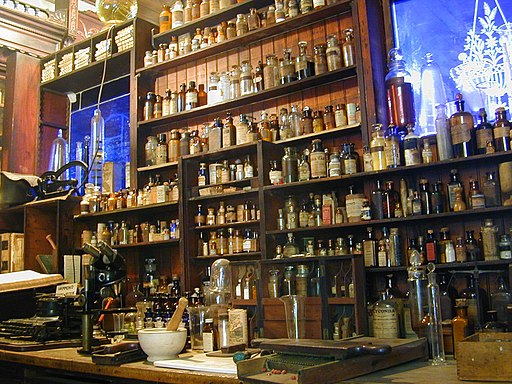 It didn’t take long before Dr. Dupas ran the previously thriving business into the ground. Patients of the shop never seemed to recover from their ailments. Some would enter the shop and disappear altogether. Apparently, Dr. Dupas had been conducting experiments on patients in the upstairs of the pharmacy. Many of them died as a result of the medications.

He had a particular interest in pregnant women, who he would administer large doses of voodoo potions or experimental medicines. Many of these patients’ children would be born with strange birth defects.

The pharmacy closed in 1871 after Dr. Dupas passed away.  His presence lingers inside the former shop which now serves as the New Orleans Pharmacy Museum. Staff see his ghost dressed in a brown suit and lab coat opening cabinets arranging his medicines. He often throws books or items across the room or sets off the museum’s alarm system. Visitors of the museum report feeling strong negative emotion inside the museum. Pregnant women frequently complain of stomach pains when visiting the museum.

Would you dare to visit the most haunted places in New Orleans? Take a walk on the New Orlean’s Ghost Tours to see if you come across the spirit of Dr. Dugas, the Sultan, or Madame LaLaurie.

About the Guest Blogger: Allison Michelle Dienstman works with New Orleans Ghosts Tours, which runs Haunted Cemetery Tours through the oldest above ground cemetery in the US, the St. Louis No. a Cemetery. Her tours are held daily and are perfect for all ages. The journey includes information on Voodoo magic, witches, stories of murder, and tragedies of war all of which took place right here in the Big Easy. Find New Orleans Ghosts Tours on Facebook.