I have to admit, I was skeptical about just how “magical” Walt Disney World was going to be. But it truly is a magical place for all ages.

We were only at Disney for a day since we had family obligations in Cocoa Beach but since we were so close we felt it would be a crime not to take our three-year-old, Princess-obsessed daughter to Disney World. (My daughter is referred to as Princes 1.) Since our time was limited I mapped out where best to spend the day, given her obsession with the princesses it seemed Fantasy Land inside the Magic Kingdom was the best place. 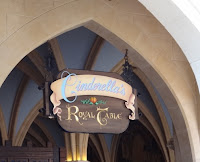 We were able to secure a coveted reservation at Cinderella’s Royal Table for breakfast with the princesses. (It’s true that this in not something to book last minute. Reservations book VERY early so plan ahead – like months ahead. We were lucky to get a table a few weeks in advance but I think that was due to it being off season and a Thursday morning. However, I do want to note, it was a full-house. You should still plan well in advance if it’s off season.) 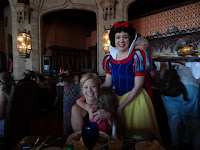 For as much as my child is in love with Cinderella and pretends to be her, daily, she wanted nothing to do with the real thing. And so began the drama.

We entered the castle and Cinderella was greeting her guests and taking photos with them. We patiently waited in line just to have Princess 1 meet Cinderella. When it was our turn to say hello, Princess 1 hid behind me. I had to carry her into the area and then she buried her head in my shoulder. Tears were next. We were able to salvage one photo of this “memorable” event. 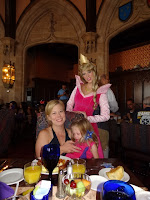 We then headed up the palace stairs to the dining room for breakfast and more Disney princess meetings. Not all the princesses were there though. We were only going to be meeting Snow White, Sleeping Beauty, Belle and Arial. 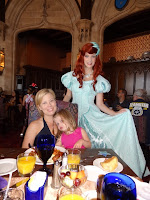 We were now more prepared for Princess One’s shyness, which was fine. She’s three after all and even though she loves princesses, they’re still strangers. I’m good with it. The Husband and I just had to laugh and roll with what was coming next because she brought it on. 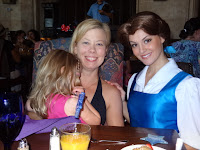 Princess One was eating a roll when true to her nature, quite, sweet, Snow White quietly approached her from behind. The surprise of having her favorite princess not only be standing next to her, touching her arm, talking to her sent her into a complete panic. Tears. Screams. Seriously. Our table was THAT table.

Every parent knows what I’m talking about and if you don’t you’re lying. Needless to say our chat with Snow White was rather short. I did insist on a photo though. (I wasn’t about to waste this opportunity to embarrass Princess One later by photographing the experience.) You’ll see in the photos how Princess One did begin to warm up a bit throughout the experience. By the time Belle arrived at the table she was finally looking at her. 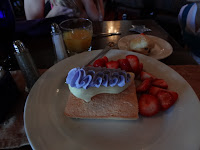 I do think the princesses had been warned, or at least witnessed the Snow White encounter as they all seemed to approach with caution. Sleeping Beauty did the best job in being quick in saying hello, taking a photo and being on her way. Perfect for a terrified, yet awe inspired three-year-old little girl. Thank you.

Now, being THAT table did work to our advantage. The chef had witnessed the Snow White encounter and felt so terrible that he prepared a special desert for Princess One, to share with us of course. It was awesome. A white chocolate “glass” slipper filled with cake and purple icing. Delish!

Overall, breakfast at Cinderella’s Royal Table was great. The food was good, the service was fabulous and the experience itself is well worth the cost. Even if your child is all about the drama. As a parent or someone going with a child you just have to roll with what the kids are going to dish out. Otherwise, you’ll just be angry that you spent a lot of money for your kid to ruin it. They’ll only ruin it if you let them. Words to live by.