When it comes to fishing, some spots are just better than others. While you can catch fish in just about any lake or river you dip a line into in America, certain regions are known for their diversity in fish, and types of fishing as well. If you are a fishing fanatic looking to take a vacation solely for the purpose of fishing your heart out, there are a few fishing vacation spots you should consider.

From the swamps of the everglades to the deep seas of the Florida Keys and the trophy loaded coastal waters of Miami, Southern Florida has it all. If deep sea fishing isn’t your thing, you can head over to Lake Okeechobee, known by locals as “The Big O”. Lake Okeechobee is a mere two hours away from Disney World, and happens to be the second largest freshwater lake in America. It’s a perfect lake for fishing as the average depth is only 9 feet, and is most renowned for its population of largemouth bass. The weather on the lake is nearly perfect throughout the entire year, and it also has large populations of Catfish, Crappie, Bluegill, and Pickerel.

In addition to these many fishable species, there are also many types of endangered wildlife species you can observe on Lake Okeechobee such as Bald Eagles, Whooping Cranes, and Florida Alligators. The Everglades also offer a vast array of fishing opportunities, as one-third of Everglades National Park is covered by water. Among the fish species you will find here include Sea Trout, Redfish, Snapper, Bluegill and Bass as well.

You can also do some saltwater fishing in areas like Florida Bay, or Ten Thousand Islands. If deep sea fishing is more your thing, you can head out to the Florida Keys and fish for Marlin, Tuna, Dolphin, Sword Fish, Wahoo, and Sailfish among many others.

They don’t call it “The Land of Ten Thousand Lakes” for nothing. Minnesota has thousands of freshwater lakes loaded with plenty of Sunnies, and Crappies. In addition to the many freshwater lakes scattered throughout the state, Minnesota is also home to Lake Superior, the largest freshwater body in the entire world. Lake Superior is so huge you can sit out in the middle of it and feel like you’re on the ocean, because you won’t see land in any direction you look. Some of the most common fish you will find in Lake Superior and its many tributaries include Northern Pike, Brook Trout, Perch, Lake Trout, Walleye, Salmon, and Smallmouth Bass.

Most of the freshwater lakes in Minnesota tend to freeze over in the winter, giving fishermen the opportunity to fish year round and set up icehouses when the ice is thick enough. The combination of thousands of lakes, as well as year-round fishing and the world’s largest freshwater lake, makes Minnesota one of the best fishing vacation spots in the world. 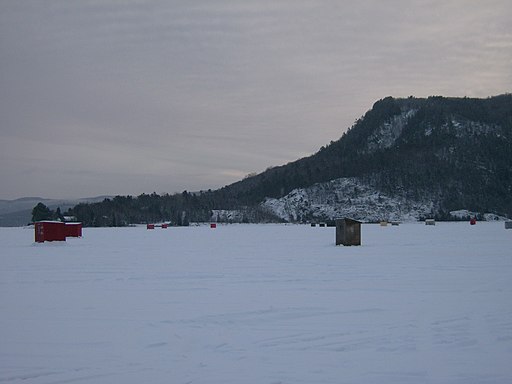 By Fungus Guy, via Wikimedia Commons

The big island of Hawaii is another one of the most popular fishing vacation spots in the United States. Located deep in the Pacific Ocean completely isolated from the mainland, Hawaii has many different exotic species of fish available to catch. It’s also another destination that offers both saltwater and freshwater fishing, as there are freshwater lakes within the island itself as well.

Some of the fish you can expect to find in Hawaii include Yellowfin Tuna, Swordfish, Mahi Mahi, Ono, Ahi, and many others. The fact that it’s also one of the most beautiful places in the world doesn’t hurt either. If you have a family with children, you can book a vacation and let them have fun on the beach while you go out and experience some of the best fishing in the world.

The Kona coast is world famous for its big game fishing and fishermen from all over the world fly in to participate in large scale tournaments. Whether you decide to go big and book a charter on the open ocean, or try your luck in the many streams, jetties, or right off shore, Hawaii is sure to provide you with a breathtakingly beautiful and unforgettable fishing experience.

Fishing is one of the most exciting outdoor activities in the world, and it’s fun pretty much anywhere you do it as long as the fish are biting. But if you are looking to step it up and maximize your fishing experience, the three places discussed here are some of the best areas to do it. Whether you are ice-fishing in below zero weather in Minnesota or casting your line in Hawaii sunshine, you’re sure to have one heck of a time at any of the spots on this list.

What are some of your favorite fishing vacation spots and why?